What Is Egg Paint? A Briefer On Egg Tempera What is egg paint? Egg paint or egg tempera is a centuries-old painting medium until oil paints replaced them in the 1500s. This article let us learn of egg tempera's history and how it flourished as a medium over the years. We also included a tutorial on making your tempera paint with items at home, plus a few FAQs regarding egg tempera.

To paint with egg tempera, prepare the chalk gesso to apply on the wood panel. Prepare the egg medium, then mix a small amount of pigment with a few drops of the egg medium. Draw the sketch, underpaint, then paint your design. Lastly, apply the right varnish to protect the painting.

As mentioned above, egg tempera, or simply tempera, is ancient. The earliest records of tempera paintings are murals in ancient Greece and Rome, around the 1st century through the 4th century BC. It uses egg yolk as a water-soluble binder and pigments, some of which contain heavy metals like mercury, arsenic, and lead.

Later, artists used this medium to paint icons during the rise of Christianity in the Medieval era. Even with the rise of oil paints, artists like Fra Angelico and his contemporaries continued working with egg tempera. Some artists even used tempera for underpainting their oils.

In the 14th century, when oil paints emerged as a new paint medium, the use of tempera as a medium dwindled. In response, tempera artists organized themselves into a guild to preserve the knowledge on tempera painting.

The book Il Libro dell' Arte (The Book of Art), written by Cennino Cennini (1370-1440), became one of the foremost resources on tempera painting. It is so useful that the book is still in print and translated into English by several authors. Mary Merrifield was the first to translate the book into English in 1844.

In the early 20th century, many modern artists saw the promise of using tempera paints and began to revive them. The Society of Painters in Tempera, formed in 1901, was one such move. Later, more artists got interested in egg tempera that they formed the Society of Tempera Painters in 1997 intending to promote tempera as a painting medium.

How to Paint with Egg Tempera

Prepare the rabbitskin glue by soaking the glue granules overnight in water. Mix the same amount of titanium dioxide pigment and chalk filler to make the chalk gesso. Unlike acrylic gesso, chalk gesso has a thicker consistency.

Warm the glue mixture on a double boiler, but don't allow it to boil, maintaining at 127 Fahrenheit. Pour the hot glue into the dry ingredients, then stir gently without making bubbles.

Keep the chalk gesso warm by placing it into a hot water bath. If the water bath gets too cold, warm it with the cold gesso to activate it again.

Priming for tempera is slightly different from priming a canvas for oil painting.

Dip the priming brush into the chalk gesso and apply a smooth coat on the wood panel. Allow the first layer dry before applying the subsequent coats.

Apply 2-3 coats of the chalk gesso in different directions, let it dry for at least a day, then sand to a mirror smooth surface.

Mix a small amount of black and red earth pigment with egg emulsion to make a neutral brown or mix red, yellow, and blue to make olive green for the underpainting. Use as much little color as you can so the underpainting does not mask the shading.

Looking for more tips on choosing the right colors for underpainting? Check out the tutorial section in the How to Use Oil Paints.

The first stage of the painting process involves adjusting the tonal values. Add hatching and cross-hatching patterns to the verdaccio underpainting using a broad brush.

For the second stage, use a smaller brush to paint over the first layer. Go over the painting until you set the paint down. Repeat the hatching and cross-hatching until you get the desired effect. Let the layer dry, then add another layer to achieve the richness of the colors.

Last is the finishing stage. Here, you add pure colors to make them pop out. Do not use any whites on the colors, as you may have used them in the first and second layers. Add details using a fine brush, darken the shadows, and define the outlines.

Like oil paints, egg paints take a long time to cure (at least a year) before you can finish it with gloss varnish. You can also opt for matte varnish or wax varnish, depending on what finish you prefer.

How to Make Your Own Egg Paint Here's a simple recipe to make egg tempera. The vinegar added serves as the preservative, and the emulsion will last for 3-4 days at room temperature. Alcohol is a good alternative to replace vinegar.

Here's another recipe where you use the whole egg instead of just the egg yolk. It also keeps for 3-4 days at room temperature. 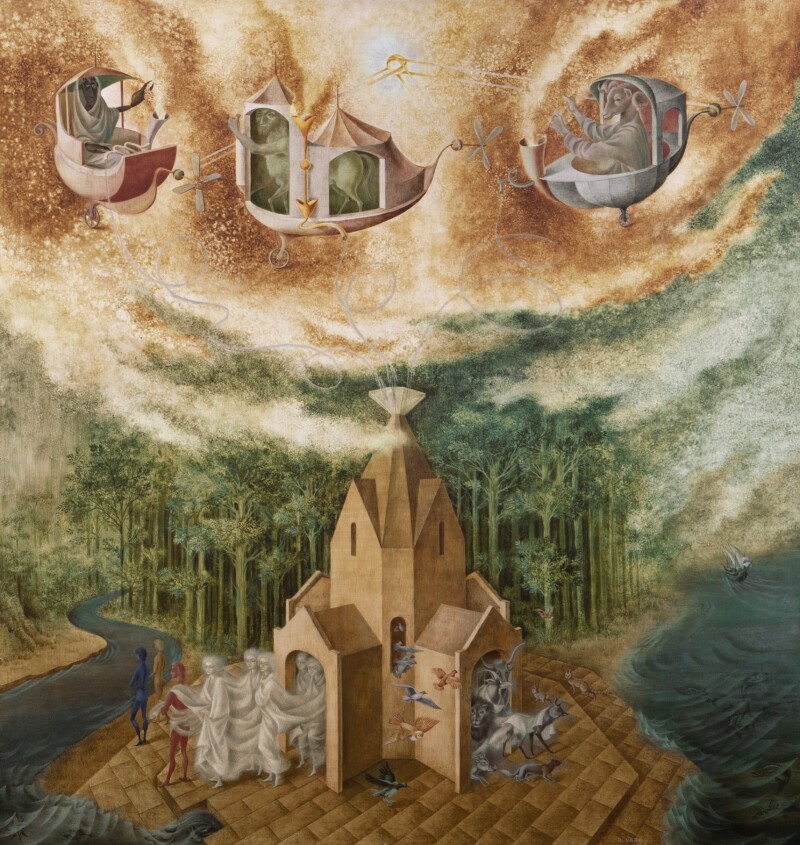 The Vanguard Spirit, Tempera on Masonite by Remedios Varo - Image by Sotheby's

To date, many artists have taken up egg paint as their medium. The most prominent European artists are Giorgio de Chirico, Pietro Annigoni, Pyke Koch, and Eliot Hodgkin, and the Spanish surrealist Remedios Varo.

Below is a mini-gallery of tempera paintings sold at Sotheby's. 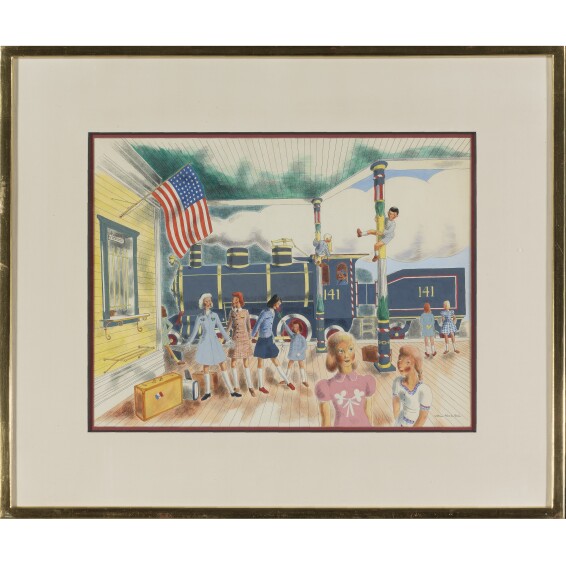 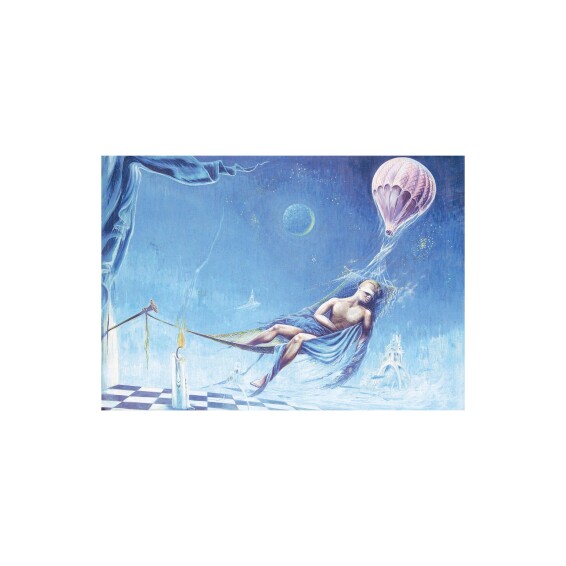 The Edge of Sleep, Tempera on board by Stuart Armfield - Image by Sotheby's 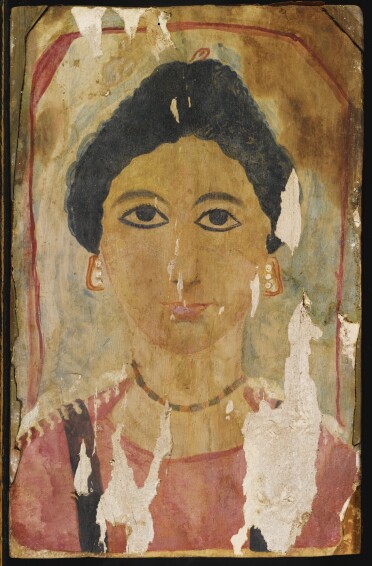 An Egyptian Tempera Mummy Portrait of a Woman, Tempera on panel - Image by Sotheby's

Why do people use tempera?

Egg tempera paint has an excellent archival quality as a painting medium, so the colors remain the same, even after centuries. They also apply in transparent layers, so the white gesso makes the colors more vibrant.

When artists discovered the use of egg emulsion for paintings, they didn't have much choice until the Medieval era, when oil paints challenged the tempera's primacy as a painting medium.

However, compared to oil paintings, tempera paintings are more resilient and less prone to damage since they cure beautifully with time.

What is the difference between tempera and oil paints?

Oils paints are oil-based paints that need linseed oil, walnut oil, or alkyd medium to thin their consistency before application. You also need solvents to clean your oil paint brushes because soap brush and water alone are insufficient.

On the other hand, tempera paints use eggs as a binder and powdered pigment to create the paints. Egg tempera dries quickly, faster than oil paints. They are also permanent, and you can no longer work on them once applied on the canvas, unlike oil paints that remain workable for a considerable time.

However, priming the surfaces for egg tempera paintings is a lot more labor-intensive than priming for oil paints. The result, though, is enough as an incentive to work with egg paints.

Can you paint with egg whites?

Glair is paint made with egg whites. They have a velvety matte finish, and artists who made illustrated manuscripts during the Middle Ages relied heavily on glair because it covers better than gum arabic.

Can I use tempera paint on canvas?

Though you can use tempera paint on canvas, it is not the ideal surface, in the same way that watercolors need a special canvas. If you want to use canvas, stretch it over a wooden panel to better support the canvas. It does not have the same archival properties as when you paint on wood.

Tempera works best on rigid surfaces like wood panels, poster board, and Masonite. You may use it on concrete to make murals, as long as you protect them from outdoor elements.

Can you mix tempera and acrylics?

Acrylics and tempera are both water-based. However, acrylics and tempera have different chemical makeup. Some artists experimented with tempera and acrylics, but the resulting texture is grainy and not the best quality, especially if you're working on a professional piece.

You may use tempera as an underpainting for oil paintings, though, with excellent results. To learn more about tempera painting, you may want to enroll in online painting classes we have in this list.

We hope you enjoyed reading egg paint's interesting history and comeback as a promising medium for modern art. We also hope you learned from our short tutorial on working with tempera and making your tempera paint. Do you think that tempera is an interesting way to create art? Drop us a line to let us know what you think.