According to archeological finds, glassmaking is an ancient form of art, with the earliest evidence dating back to around 3,500 BC in Egypt.

Glass can be used in several different ways to create beautiful and functional works of art. In the past, most people were pretty familiar with stained glass windows in churches and cathedrals, but there have been other examples worldwide. Today, glass art is a global phenomenon and can be seen in many various forms.

This article will explore what it means to do glass art, how it evolved, and what makes glasses different from other forms of media. We'll also cover practical uses for glass, such as drinking vessels, and decorative ones like stained windows.

The History of Glass Art Who invented glass remains a mystery, but it is also common knowledge that the Egyptians made the first glass vessels when Tuthmosis I reigned over the New Kingdom. They also developed the technique of core-forming and cold cutting. We attribute the technique of glass making and glass working to the Romans during the 1st century AD. At the same time, artisans around the Babylonian area also developed glass blowing in the 1st century AD, cutting the more tedious Egyptian core-forming technique. Asian glass art, represented mainly by the Chinese and Indian artists though the Indians discovered glass art earlier than the Chinese.

Indian glass artisans developed many glass molding, coloring, and decorating techniques, while the Chinese are more known for the high barium and lead content on their glasses. Though they discovered art later than other civilizations, Europe also became the seat of the most innovative glass artists, especially Murano Island in Venice.

Later, France, Bohemia, England, Germany, and other European countries claimed their fame and contribution to what we know as modern glass art. Colonists from England brought glass art to the United States in the early 1600s. Still, it only flourished in the early parts of the 18th century under the craftsmanship of Caspar Wistar, an immigrant from Germany.

Eventually, more manufacturers sprouted all over the US, some of them continue to bring us unique glassware and glass art. From humble beginnings of glass art, modern technology and the innate creativity of man resulted in some of the outrageous and awe-inspiring contemporary glass art, from sculptures to glass etching to glass blowing. Glassblowing is shaping molten glass using a blowpipe or blow tube. Glassblowers can make blown glass using free blowing or using a mold. Of these two, free-blowing is tricky and needs expertise and control to shape it as the glassblower desires.

Mold-blowing, on the other hand, uses mold, so the glassblower does not need more skills. It is also a faster way to create blown glass and is vital in the mass production of a design. Unlike the hot glass method where it uses molten glass, the warm glass technique uses a kiln to heat the glass between 1250° – 1400° degrees until it bends or "slumps," thus named slumping. The glass artist then places this heated glass into a mold to take the mold's shape.

Another warm glass technique called fusing involves more heat of up to 1400° – 1600° to let the glass pieces fuse.

Yet another method is kiln casting. The artist pours crushed glass or Pate de Verre (powdery glass paste) in a mold to melt it and take form. Acid-etched glass refers to applying an acid, like hydrofluoric acid, on the surface of the glass to create a frosted and translucent appearance.

Sandblasting glass is a technique where the glass artist uses aluminum oxide or silica carbide to blast a glass. The finished product resembles acid-etched glass.

Most Notable Glass Arts in the World

Here are some of the most fantastic glass art in the world, including a whole glass building, a Guinness-record holder of the largest stained glass wall, and many others. According to the Guinness Book of World Records, the largest stained glass window is in Justice, Illinois, a mausoleum in Resurrection Cemetery constructed in 1969. The stained glass wall measures 22,381 sq ft, made from 2448 stained glass panels. The Corning Museum of Glass, located in Corning, New York, houses the most extraordinary collection of glass arts globally, including 35 centuries of glass, according to their website, and some of the most beautiful collections of contemporary glass art.

Aside from the extensive collection and galleries, The Corning Museum of Glass also runs the Innovation Center and the Rakow Commission, both endeavors aimed at improving the industry of glass. Dale Chihuly is one of the world's leading glass artists who made another record as the maker of the largest glass sculpture in the world. Officially declared as such on the Guinness Book of World Records on October 15, 1998, the sculpture is on the ceiling of the Bellagio in Las Vegas, Nevada.

The glass sculpture measures 9 meters by 20 meters and is officially named Fiori di Como (Flowers of Como). It has more than 2,000 colorful hand-blown glass flowers. The Churaumi (lit. Chura, meaning beautiful or graceful, and Umi meaning ocean) Aquarium is a public aquarium located within Ocean Expo Park in Motobu, Okinawa. Its predecessor, the Okinawa Ocean Expo Aquarium, closed its doors in August 2002 due to massive deterioration. The Churaumi Aquarium opened later that year in November.

It has four floors with exhibits for deep-sea creatures, sharks, coral, and tropical fish. The Aquarium utilizes 19,000 square meters of land, containing 77 tanks filled with 10,000 cubic meters of seawater.

Though the Aquarium is not art in itself, it uses the largest acrylic glass panel in the world at the time, measuring 27 x 74 feet and almost 2 feet thick. The massive display of marine life, though, draws thousands of visitors each year. 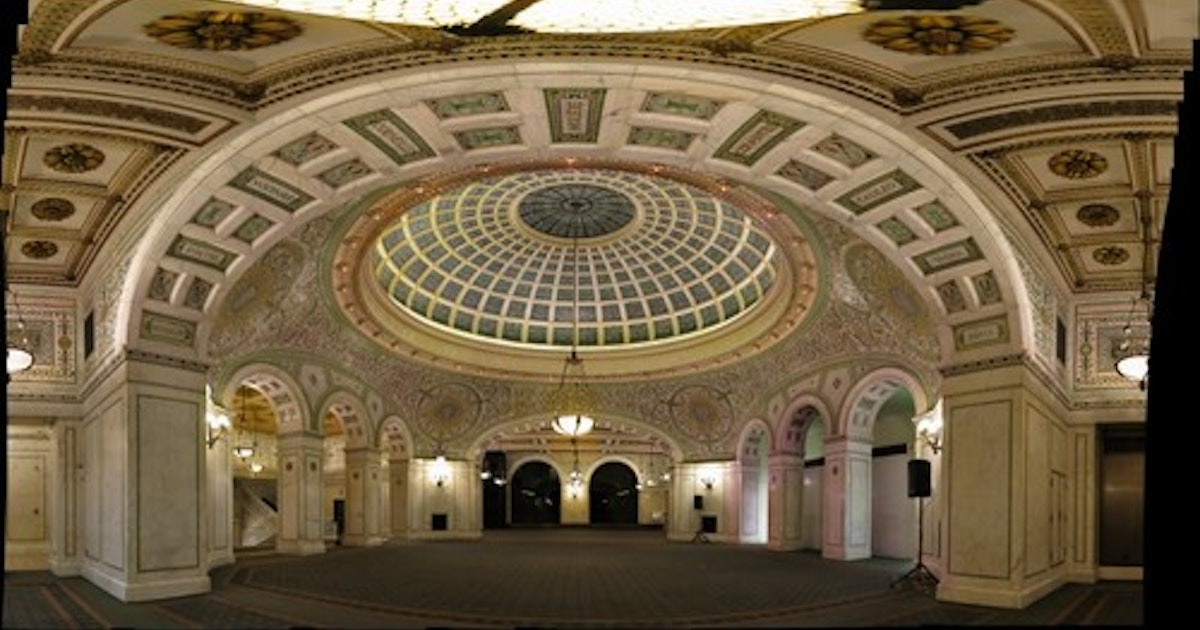 The majestic Preston Bradley Hall in the Chicago Cultural Center features an upper wall made of Carrara marble, decorated with glass and mother-of-pearl mosaic, and topped with a dome made of Tiffany glass.

The 38-foot diameter glass dome design used 2,848 glass jewels of rippled and streaky opalescent glass cut in a fish-scale pattern. The center of the dome is a giant glass rosette.

The Preston Bradley Hall is perfect for all sorts of private events, offering guests a stunning view of Millennium Park. 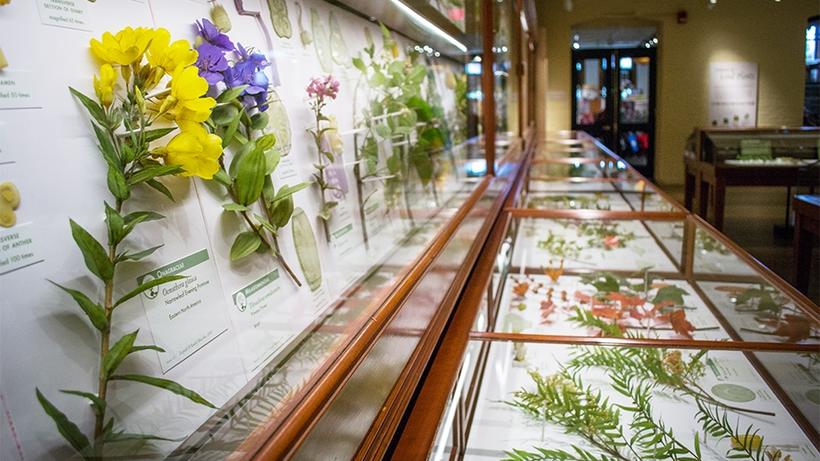 The Harvard Museum of Natural History possesses a vast collection of glass flowers known as the Ware Collection of Blaschka Glass Models of Plants (also known as the Glass Flowers), named after Dr. Charles Eliot Ware. His widow, Elizabeth, and daughter Mary Lee financed the commissioning of these glass flowers under the guidance of George Lincoln Goodale, then director of Harvard's Botanical Museum.

With almost 4,300 glass models of flowers from 780 species found worldwide, this collection is the only one of its kind in the world. The glass artists who made this are Leopold and Rudolf Blaschka, who were known for their impressive glass models of sea creatures. The Blaschkas completed the collection in 1936 after almost 50 years of arduous work. 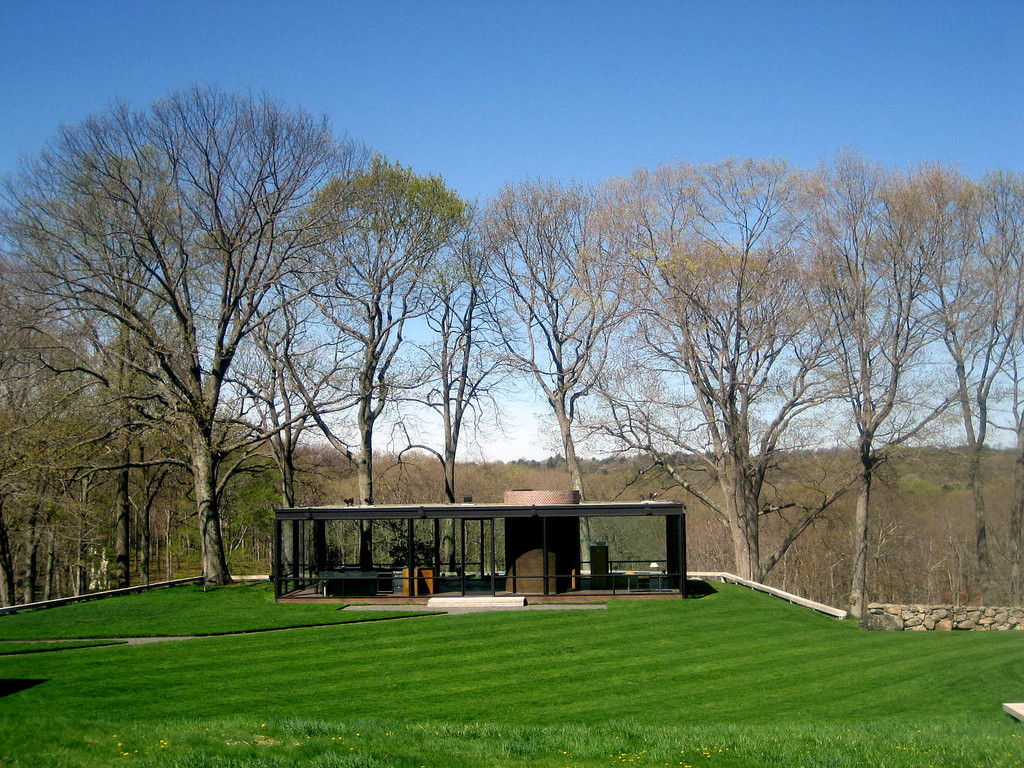 Philip Johnson built The Glass House as his private home in New Canaan, Connecticut, in 1949. Johnson is an American architect known for his modern and postmodern designs during his time.

Many believed that he inspired the Glass House from Mies van der Rohe's Farnsworth House. Van der Rohe even designed some of the furniture in this iconic house. The design used bricks to enclose the fireplace and the bathroom, but everything else is visible to the outside world, thanks to the glass walls. 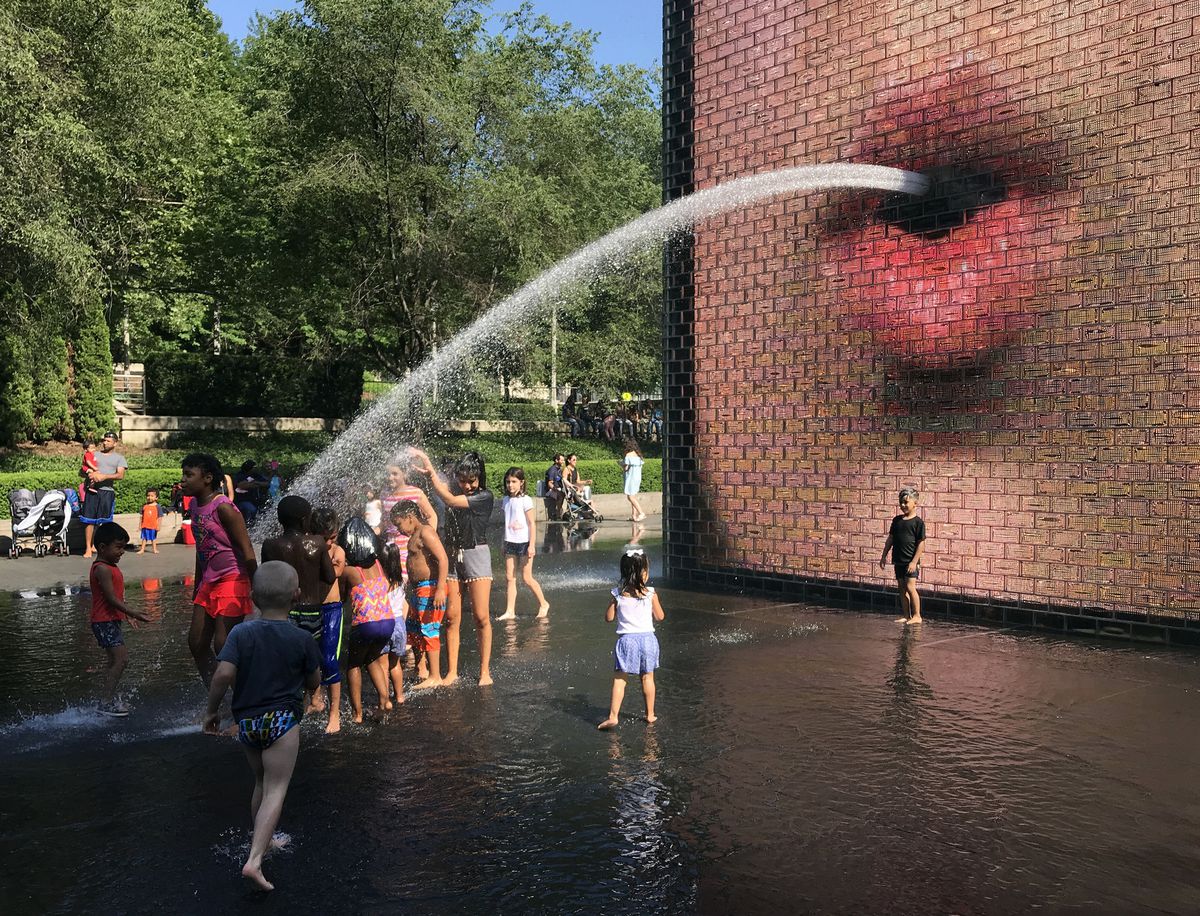 Another testament of the role of glass in art is the Crown Fountain, which opened to the public in July 2004. The twin fountains, named after the Crown family, who donated the bulk of the $17M fountain and reflection pool, use glass brick for the 15m video sculpture.

The faces featured in the fountain are Chicago residents, filmed for a series of videos to show a face sporting a puckered mouth, an open mouth, and a smiling mouth. From these different mouth positions spurts a fountain of various dimensions.

During warm days, locals and tourists enjoy a romp in the reflecting pool, which drains into a grate and then filters before being pumped and recirculated through the fountain. 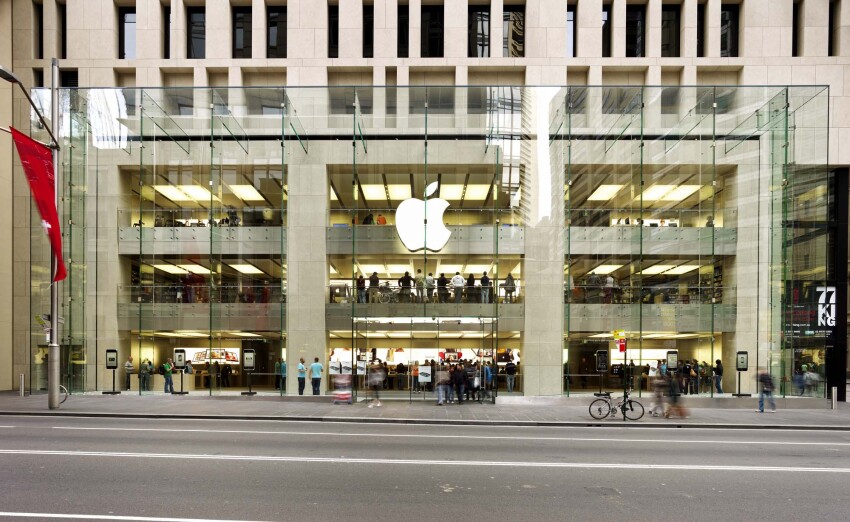 The Apple Store in George Street, Sydney, Australia, holds the highest density of seamless glass shelves in the world. It is one of the most photographed places and almost as iconic as the Sydney Opera House.

The three-story facade, incorporated into the decades-old building, has 6,180 square feet of glass panels. Bohlin Cywinski Jackson designed it, and the work was completed in 2008. In Paris, France, the Louvre has four glass pyramids - with three smaller pyramids surrounding the main one. In 1983, the Chinese-American architect I.M. Pei designed the glass pyramid to accommodate the ever-growing visitors of the museum. The main pyramid used 603 rhombus and 70 triangular glass segments.

From the pyramid, visitors descend to the lobby before accessing the main Louvre buildings. Since its opening, the glass pyramids have become a notable landmark in Paris.

Aside from the Louvre pyramid, Pei also designed other glass pyramids for the IBM Somers Office Complex in New York and the Rock and Roll Hall of Fame in Ohio.

Bridge of Glass in Tacoma - Image by Travel Tacoma

The Chihuly Bridge of Glass came into being to connect downtown Tacoma, Washington, to the Museum of Glass, bridging over the Thea Foss Waterway. The museum officially opened in 2002 as a tribute to Dale Chihuly, a foremost glass artist from Tacoma. However, Chihuly did not want to monopolize the fame, and the Museum eventually showed glass art from artists worldwide.

However, Chihuly showcased three collections on the 500ft footbridge, one of which is the Sea Pavillion found on the downtown side of the bridge. It features 2,364 marine life-inspired glass art enclosed in glass panes on the ceiling of the partially covered bridge.

Next comes the Crystal Towers near the center of the bridge. Before entering the Museum of Glass, you will see the Venetian Wall that showcases 109 Art-Deco artworks. 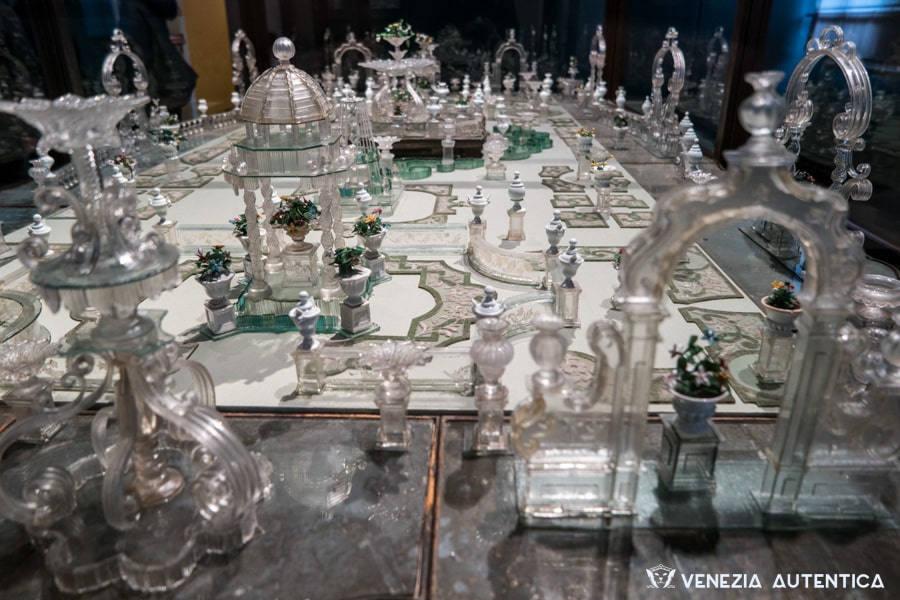 Known for its Venetian glass and innovations in glass art, Murano became the seat of glass art in the late 13th century. In 1861, the museum showcased the history of glass and Murano glass. It also displays the evolution of glass art and the products made from it. The Bicentennial Conservatory opened to celebrate Adelaide's bicentennial celebration features Cascade, a glass sculpture by Sergio Redegalli. The artist used more than 500 sheets of 6mm glass to create a massive 12-ton sculpture of a cascading wave.

Glass as an art form has been around for thousands of years, so it's no surprise that you can find examples everywhere. Whether it be drinking vessels or stained glass windows on the side of churches, glass is a part of our modern-day lives.

Do you need inspiration for your glass art? Check out these easy glass painting ideas.
Back to Articles
Use left/right arrows to navigate the slideshow or swipe left/right if using a mobile device